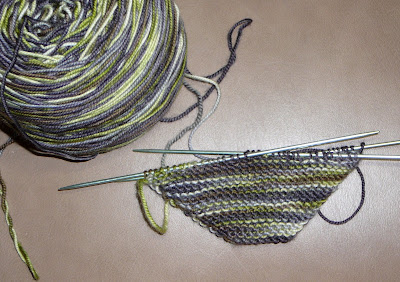 I started the Inside/Out Socks from the Socks That Rock club. This is mediumweight Monsoon STR. I have to admit that when I opened the package I was disappointed. This colorway is so not me. However, Geoff spotted it and announced that it would be awesome to have socks made of it. I have never made socks for him, mostly because he is incredibly hard on socks. The more I thought about it I realized that this pattern might be a good one for him. Its garter stitch toe and heel should wear well and the ribbed arch is knit tightly for good wear too. This is the first time I've made a short row toe. I decided to photograph it now before it looks like this.

We're officially on holidays. There's no school next week. Yay!
Posted by Susan at 6:59 PM

I think that's the perfect colourway and pattern for a guy - looking forward to seeing more of these socks!