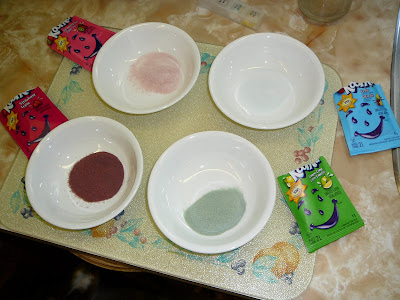 I decided to try Kool-Aid dyeing today. I used the above four flavors of Kool-Aid and a skein of Briggs and Little Durasport natural wool. I soaked the wool in hot water and a little Orvus paste for about half an hour and then rinsed it and squeezed most of the water out, leaving it damp. 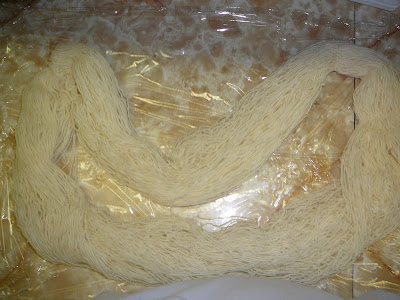 I put the damp skein on some sheets of plastic wrap then diluted the Kool-Aid with a bit of water. 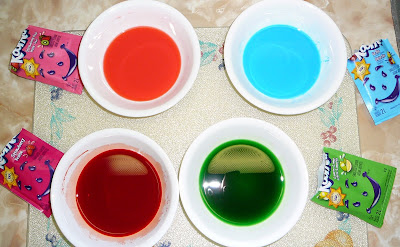 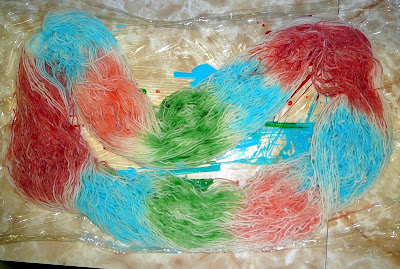 Here's the skein after I used a baster to put the colors on in a sequence (sort of, it was a pretty loose sequence). I then wrapped the wool with more plastic wrap and microwaved it for three minutes. It didn't seem to have absorbed all of the color yet so it got zapped a couple of more minutes. Then I dropped the hot wool into a sinkful of cold water and rinsed it well. 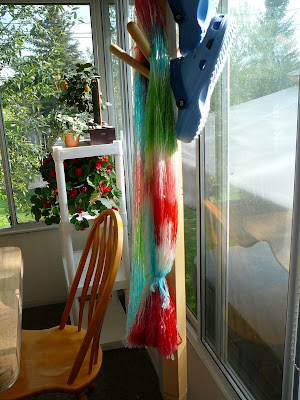 After a good squeeze to get out most of the water, here is the skein drying in the sunroom. The cheap knock-off Crocs are hanging there to keep out of the mouth of a little Dachshund who finds them quite irresistible.

My initial impression of Kool-Aid dyeing can be summed up thusly - Tie Dye circa 1968. I wasn't all that impressed by the result but admit that it's growing on me every time I look at it. I'll reserve judgment until it gets knitted.

Overall, this was not difficult to do although the kitchen had an interesting wet-sheep-mixed-with-fruit smell for a while. I'll probably try dyeing wool again in the summer but I think that I'll use professional acid dyes so that I have more control over the shade and intensity of the colors.
Posted by Susan at 7:33 PM