Thank you to all of you that wrote personally and publicly supporting my use of the disclaimer on my pattern! I have to admit that the Yahoo Knit List post really bothered me. It sort of felt like a kick to the shins after I spent time to write out and make the pattern available free to others. At first I questioned whether the disclaimer to request my permission to use the pattern for profit was appropriate. Then I got angry. If nobody else has put those particular knitting elements together and published a pattern for them, why shouldn't I ask that my effort be acknowledged if someone was going to sell the pattern or socks made using it? I never planned to make a profit from the pattern. It was free for the asking.

I soon discovered that I was not out of line to be annoyed by the post. So many of you asked for the pattern and expressed thanks! I was touched to hear that you are thinking of knitting these socks to help others: diabetic friends and relatives, renal dialysis patients, and cancer/chemo patients. I am truly honored that you feel that it will ease the pain for others and, along with the love knitted into them, that the socks will be a heartfelt gift for someone special.

I was going to do a little rant here but a couple of people expressed what I was feeling so well that I am going to share their thoughts instead (with their permission, of course).

What she failed to notice is there is nothing really new under the knitting sun. Everybody is just doing a variation of something someone else has already done. Imagine if we'd had the internet when Barbara Walker published all her books. Some tactless person would complain that she'd already done those patterns and who did BW think she was compiling them all in a book and getting credit and money for them.....


And Trish responded on the Knit List with her opinion on the matter and also wrote about it on her A Thousand Fibers blog:

Everyone was playing nice until someone posted that the disclaimer was inappropriate because the pattern was simply a composite of "generic elements" of sock knitting and that we shouldn't get too involved in copyright issues, lest we, as knitters, "take ourselves too seriously." Excuse me? Too seriously? Part of me was already dragging out the soapbox. (Ok, in my house it's a library kick-stool, but it still serves the same purpose.) Personally I don't think that knitters take themselves seriously enough, but suppose they did? Would the streets be filled with wild eyed, crazy women (mostly) waving needles and wrapping policemen in merino yarn? Would we see the rise of two new political parties--the Pickers and the Throwers? Perhaps the airlines would prohibit anyone without knitting needles from flying! Ok, ok, enough already, but I do think that knitters are like other crafters in that we don't give ourselves much value for what we do. Our community boasts its own big names but do we call Norah Gaughan and Cat Bhordi, "artists?" Certainly, few of us call ourselves, "artists" or even, "artisans." So what if the Tilted Duster never makes it to a museum unless someone wears it--does that mean it's not an incredible artistic accomplishment? I'm getting a little carried away here, I know. I'm just suggesting that when someone asks you what you do, you say something like, "Oh, I'm a fiber artist." We are artisans. We practice a skilled craft and many of us practice at a highly skilled level. Let's take ourselves seriously!

Well said! And my sincere thanks to both of you for your eloquence.


On a lighter note, here's a picture of the latest sock to jump on the needles. 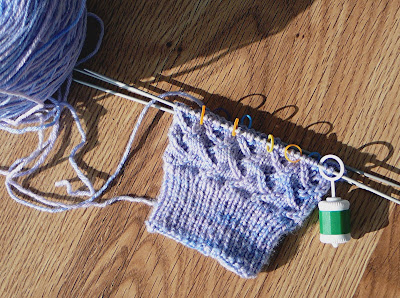 I frogged the start of the "An American in China" pattern. The Linen Stitch sole has more texture than the slip knit pattern. When I test-drove the Comfy Soled Sock I realized that I wouldn't find it comfortable to have the entire sole knit in the slip knit pattern. It was okay under my heel but I wouldn't want it for the rest of the sole. The Linen Stitch pattern underfoot would bug me.

There always has to be a few people that need to make others miserable so that they can feel happy.

I love SKS and MSKS. They are my two favorite sock knitting books.