It occurred to me when I posted yesterday that I was enjoying a lack of pain that I should probably not say that out loud. Sure enough. Fate just couldn't let that one go. Dan had just got home from playing hockey last night and left his honking big bag at the top of the stairs. I was coming up the stairs and thought I could sneak around it but caught my foot on one of the straps and went flying. Now I am one big owie from top to bottom. I have a few scrapes and bruises but mostly my muscles hurt from being jarred. My muscles don't like being moved at the best of time; they are loudly protesting my lack of grace. Dan feels badly for leaving his bag there but I don't think it would have mattered. If you tempt fate, fate bites back. If not the hockey bag, I'm sure there would have been some other obstacle that would have been in my way.
Anyhow, on a totally different tangent, here are some pics of my back yard. 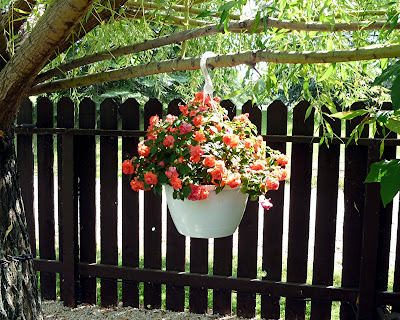 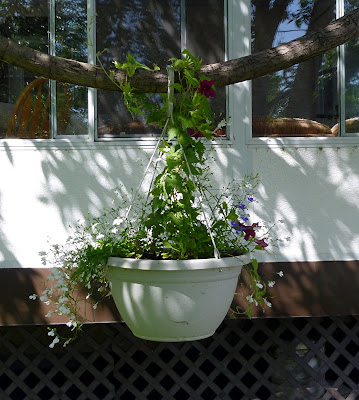 After a soggy start to the summer, everything is now lush and happy. We were lucky to escape the more severe storms and flooding that happened in other parts of the province.

Dan has been doing a good job of tackling the weeds in the garden. 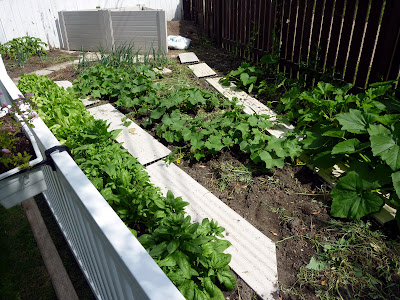 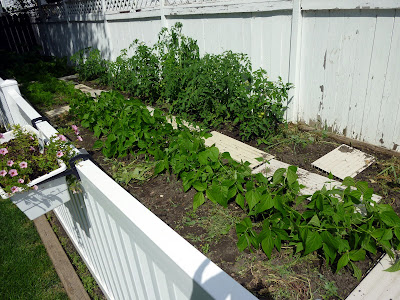 We had our first feed of green beans and beets the other day. This is a good time of year for eating.
Posted by Susan at 4:11 PM

I understand all about the pain Susan. It's either my hand or my neck(which has been a pain for 20 years). My hand will flare up when I spin for too many hours so now I am resting it. Truth be told I will sit and spin at night while watching the telly for a good 6 hours in a row.

So sorry about your fall. I hope you feel better soon.