Cooper and I thank you for all of your kind good wishes!

We got a call this morning from the wonderful vet that did Cooper's surgery (Barb at Albert North Vet Clinic) (did I already mention that it's the best vet clinic ever?) that he was doing well and could go home. When we got there he was happy to see us but was also quite happy to be playing with Barb's two kids (they were with their mom because today is Canada Day and the clinic wasn't officially open). It's a good thing that Coop is such a happy-go-lucky dog, what with all the time he has spent needing vet care.
He is ravenously hungry but we can only feed him a spoonful of canned gastro food every couple of hours for now. I think it's a good sign that he wants to eat.

His biggest problem is the dreaded cone. 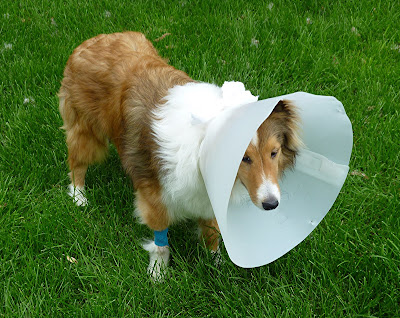 He's been walking into walls while he figures out how wide he is with it on.

Channon wins the award for best twisted, dark, and hilarious sense of humor (in other words, my favorite kind of humor!) for her comment on yesterday's post:

Glad he's okay and you were able to kill two birds with... you know. (Forgive the bad pun!)


I literally snorted out loud when I read it! Then I continued to read the comments and discovered that Lynn has the same warped mind:

He ate a rock?!?!? OMG!!!! What is it abt dogs and eating everything in site? Well at least you were able to kill two birds with one stone!!!!! LOLOLOL


and then she read all the comments and discovered that Channon had beat her to the punchline:

You guys crack me up!

Now we're hoping that the rock eating was a one-off and he hasn't developed a taste for them. We have quite a bit of landscaping rock in the yard. Cooper is a very oral dog; he's happiest showing his love by mouthing hands, ankles, whatever. I suspect he was just mouthing the rock and it went down before he realized it. I hope.

Happy Canada Day to my fellow Canucks!! I seriously love my home country and feel blessed to have been born here. If you haven't done so already, pop over to Yarn Harlot's post today. Her Canada Day posts are always superb!

glad to hear he is feeling better enough to eat!

He looks rather sad with the cone on! I'm glad he's doing well though.
Happy Canada day!

I did read Stephanie's blog and it makes me want to move to Canada!! The US is 84th on the same list. Heh.

And yes, that dark sense of humor is the only way to get thru the day!!!

What a sad picture. Life will get better again, Cooper. The cone will come off and you'll get to eat real dog food. Meanwhile, sympathy.

Glad you got a couple of laughs! I know that ailing pups don't make for light and breezy days...

And did you see that photo Sissy? THAT is what happens to doggies who lick the wrong things too much at the worst times...

Hopw Cooper is fine and I hope you got my email about the mooncollar.