Cooper found last evening's moth du jour on the carpet while I was at the computer earlier today. To his delight, the moth still had a little "kick" left in it. 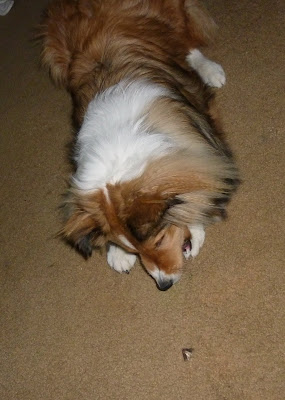 Whenever the moth fluttered a bit, Coop got all silly (as only a puppy can get) and pounced on it. At one point he laid on his side and pawed at it. You can see his shaved belly from the surgery in this picture. His neck was also shaved for the pain patch but, being a sheltie, he has enough hair on his neck to do a comb-over to hide it. 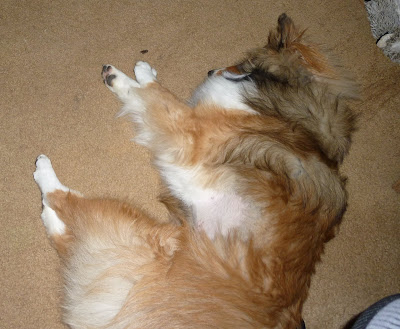 The poor moth didn't last very long with this treatment but it took a while before Cooper realized that his toy wasn't going to move any more. 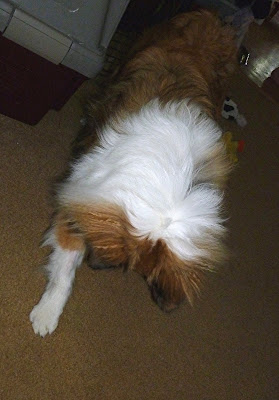 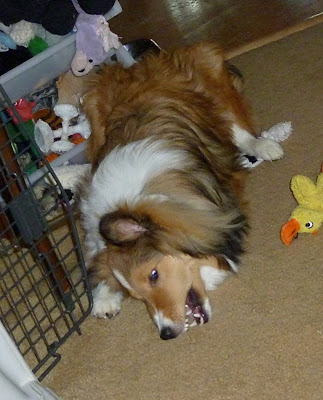 Eventually he realized that he had indeed made his first kill and posed with his prey. 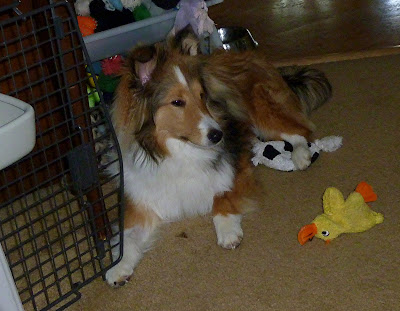 I like the background of all the puppy toys! He has a lot to choose from. At least he hasn't shredded them up.
Sharon

At least he didn't eat it. Gretchen, my 11 lb. Jack Russell, ate QUITE a large moth last week. I was sure it was going to make her sick, but it didn't phase her!

lol @ I'm the man! Love the little crinkles behind his ears.

What a dolly! My Lucy always looks very confused when they won't move anymore. g

He looks so proud!

Teaching him to kill moths has to be a good thing for someone who likes wool. Hope he got a reward for that.

What a stellar hunter! Maybe he can teach my cat a few things :P