We had fuh fuhn tonight!

I gave Dan tickets to Jeff Dunham for Christmas. We went with our good friends, Rhonda and Al. For those of you who may be unfamiliar with Jeff Dunham, you can check out some of his silliness on You Tube. He's a ventriloquist/comedian and I defy you to not laugh when he gets on a roll! In fact, I laughed so hard this evening that I got my asthma worked up. But it was worth it.

Guitar Guy did the warm-up act. Unlike on the DVDs, Guitar Guy gets to talk in the stage shows. He's a great musician and comedian on his own but most people think he is Jeff Dunham's brother. He's not. He's also not gay or a druggie (inside jokes). After a short intermission, Jeff did a comedy monologue and then brought out the real stars of the show.

I took my camera and got some pretty good photos. Here's Walter. Walter did a lot of material about Regina, Moose Jaw, Saskatchewan, and Winnipeg. It was naughty (make up your own Regina jokes here as I'm not going to give away any punchlines). 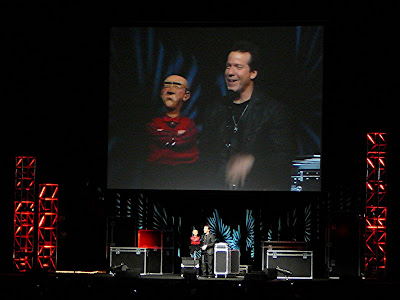 My favorite - Achmed (that's Achhhhh med, spoken with phlegm) the dead terrorist. Silence! I keel you! 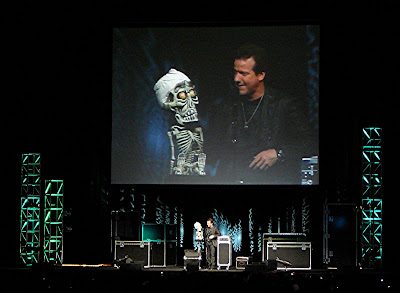 Achmed and Jeff get carried away and start improvising to make Guitar Guy crack up. 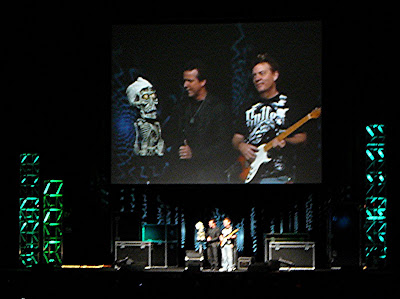 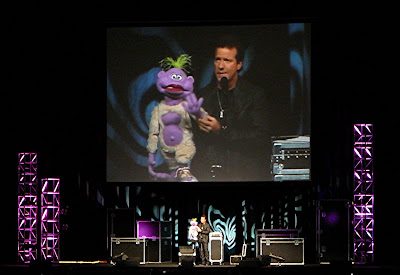 Peanut and Jose Jalapeno (on a steek). 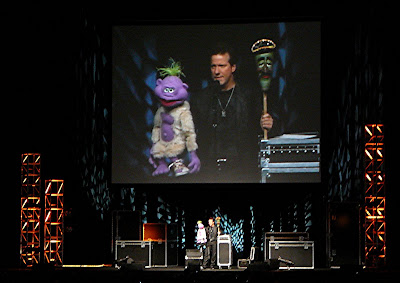 For the encore, Bubba J made an appearance. Bubba J wasn't really supposed to be part of the act on this tour so Jeff had to have crib notes to remember Bubba J's jokes. Things got a little out of hand when the audience yelled out Bubba J's dialogue before Bubba J and Jeff cracked up! Let's just say that Regina loves Jeff Dunham and the crowd had seen the You Tubes and DVDs enough to have the punchlines memorized. 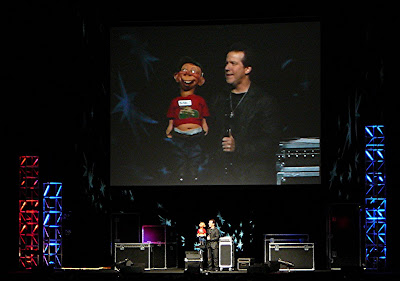 At the end of the show, Jeff got out some air shooters and sent t-shirts flying through the air into the audience. The crowd had people from about 10 years and up and everyone left laughing! It was great!
Posted by Susan at 9:50 PM

Oh I bet he was funny!! He is hysterical!!! If he ever makes it to FLorida, I'd love to see him in person.

Sitting pretty close it was obvious it isn't Guitar Guy that has the drug problem LOL. But hilarious none the less. Laughed so hard!!! Guitar Guy was amazingly talented and sooo funny!

I love Jeff Dunham! He never fails to crack me up. Sounds like you had a great time.

I saw Achmed on TV once and I thought I would die laughing.

I'm off to youtube him now. Thanks for the reminder.

And thanks for being willing to help with my daughter's disobedient puppy, Kramer.