I think I have finally got the new computer fully loaded and ready to go. I have spent so many hours doing so that my TMJ is acting up. The new computer was definitely needed as the old one was s-o-o s-l-o-w but it's crazy how much time it took to reinstall everything. I also learned that I couldn't edit the text or pictures in the blogger dashboard when Explorer was the browser but everything was fine when I switched it back to Firefox. Weird.
Anyway, I have a few odd and ends from the past week to catch up here.

First off, a few answers to comments left here.

Marguerite said, "When a vet talks about restricting a healthy dog's exercise I always suspect he/she goes in the back room and has a good laugh. "

Marguerite cracks me up! I interpreted the vet's instructions to just keep Cooper from jumping on and off things. He hasn't been too brave yet because his leg is still weak and sore. He is putting a bit of weight on it when he runs around but often still tucks it up out of the way. I'm keeping an eye on him and will watch to see that he gets more comfortable walking on it each day. It's tough to keep him completely calm all the time though. 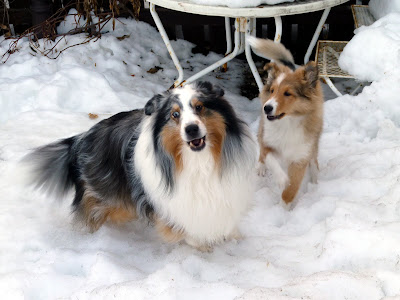 I figure if he's not squeaking, the leg's not hurting.

Tina said, "The leg also looks shorter, but I think that’s just because of the way he is lying. Can you do some physiotherapie with him? I did when Josy had her cruciate ligament torn and I think it helped. I am sure he’ll recover soon.
I love Marguerites comment ;_)"

I will do a little physio on the stiff joint if I don't see steady improvement. Jo-Ann already showed me what to do in that case.

Jody said, "Good news! He is such a cute little guy!
Susan where are your Gotland or Polwarth fibre prep and yarn pics....please give us poor addicts some crack :)"

There is a reason I haven't shared any fibre prep crack pics - there aren't any. Since the advent of the puppy, I haven't touched my scoured Gotland or Polwarth. I promise to share as soon as I get back to it.

Next up, the chicken-like birds were back again behind the fence yesterday, scurrying from the shelter of one big tree to the next. 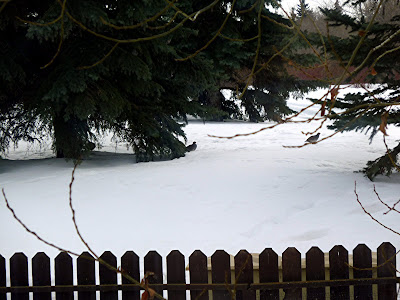 I cropped one the pics and made it considerably sharper so that I could see them in more detail. 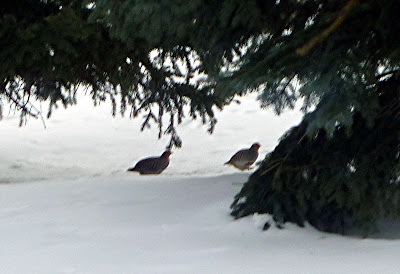 I'm not sure how much you can see from this blog pic but, when I look at it in a big screen, I can see that their heads have some red markings and they have dark markings on their bodies. I'm reconsidering my decision that they are quail. When I googled partridges I found this pic. Although the markings aren't identical to "my" birds, the partridge looks more like them than the quail pics. I have decided that they are partridges. At least until someone who knows really what they are sets me straight.


And finally, I ordered a set of 16 learner spindles from theknitstore on eBay so that I would have them to take to Katie's youth group for part 2 of our spinning adventure. 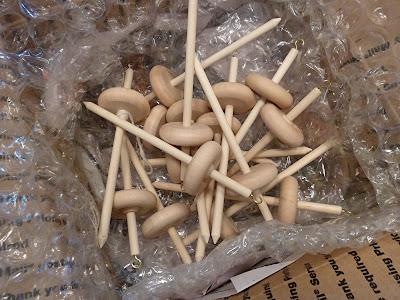 They are very nice and spin well. The price was very reasonable too. I had Dan file a notch in each whorl (I'm very allergic to sawdust, even a little bit, as I discovered when I notched the first four). I tied a leader onto each one and they are ready to introduce new spinners to the world. I figure there will be other teaching opportunities along the way and this set of spindles will be well-used. Maybe I'll get ambitious at some point and paint the whorls with acrylic paint, just to jazz them up a bit, but they are perfectly usable as is for now.
Posted by Susan at 10:38 PM

Have wasted too much time this evening straining my eyes on your bird picture and looking through my bird book.

How about Spruce Grouse? The're described as "chicken like", the males have some red on their heads, and they're found throughout Canada. Plus it looks like yours are living in the spruce trees, which is what they like to eat.

My handy dandy Saskatchewan Birds book (it is so much easier when they eliminate all the birds that arent actually in Saskatchewan) thinks that they look an awful lot like Grey Partridges.