It's been a busy few days! Thursday was my birthday, the big 5-0. I chose to live in denial about it so didn't make big party plans. There was a dog show here at home on Friday, Saturday, and Sunday so I spent most of Thursday grooming Darcie's sheltie Kai and Bentley for the ring. Darcie posted some pics on her blog of Kai while we were grooming him. We took the dogs outside after we groomed him. There was a short respite from the rain so the dogs had a chance to run around and play after being cooped up in the house for several rainy days. Bentley found a really big stick and had a great time playing with it. 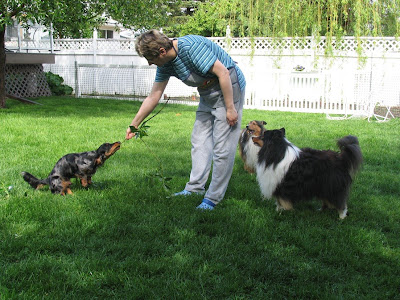 You can see that he is using every muscle in his little body to tug that twig! He is surprisingly strong. Robbie and Kai are watching with interest but they didn't really "get" his fondness for a tree branch.
Bentley took Best of Opposite Sex to his sister Chloe's Best of Breed wins two days out of three at the show. On the other day, his brother Hermes beat him for the Best of Opposite Sex win so the wins were kept in the family. Chloe is a lovely little Dachshund with tons of attitude and she deserved the wins.

The big news is that Kai took Winners Male two shows out of three to earn 4 points and complete his championship with a point to spare! He is now known as Ch. WillowGlyn 4 Off The Floor. Katie took Kai in for junior handling today and placed second in her class, beating two girls who are much older than her. She definitely has a future in this sport! Darcie got a show photo of Kai's win and one of Katie's win will be coming in the mail when ready. I'm sure that she'll be posting them on her blog if you want to see them.
Posted by Susan at 5:19 PM