We are having new fence installed around the garden in the back yard. It's something that we talked about doing for a few years now. We had the garden barricaded from the dogs with plastic mesh anchored by rebar and it did the job more or less until the Dachshund came to live with us. That fence was no barrier to Bentley. He either scooted under it or just chewed a hole in it to get into the garden whenever he wanted. So we hired a local company to install a vinyl picket fence.

Here are the stalker pictures of the guys in the back yard this morning. I took the pics furtively from the window so I wouldn't have to try to convince them that I was sane, really, and that it's not at all odd that I would take a picture of them. I even briefly considered asking them to pose with my sock but decided that it would just require more explaining that I didn't have the energy for. 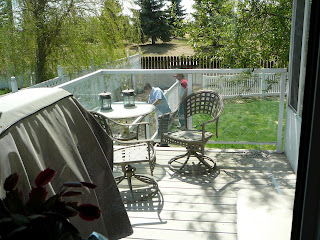 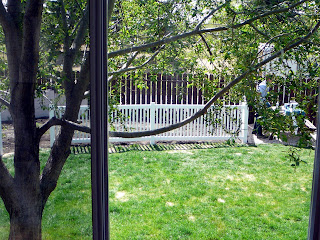 It's quite impressive how fast several guys who know what they're doing can install a fence. However, the pickets that were supposed to arrive on a truck didn't so they couldn't finish it today. 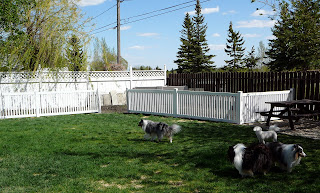 I had to put the plastic mesh back up where the gate will be and for several feet nearest the house. It may take a couple of weeks for the pickets to arrive so I guess I'll just go ahead and get the garden planted while we're waiting. I'm planning on getting some balcony flower pots to hang from the fence which will add color to the yard. 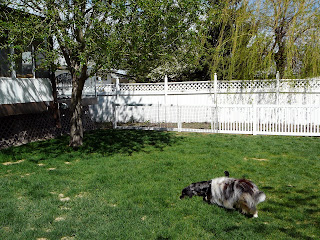 While I was outside with the camera I took this picture of the neighbor's crab apple tree in full bloom right next to our yard. I don't know what kind of tree has the pink blooms behind the apple tree but it's sure pretty! 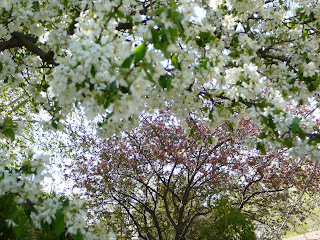 The back yard looks beautiful!

Oh those trees are beautiful. My husband filled our yard with Pine trees, they smell good but not always the prettiest to look at. Oh well

The yard looks great! I love flowering trees but they kill my allergies. It's almost worth it for the view you get. :~)