Dog toys, that is, not knitting, spinning, etc. toys.
We have many, many dog toys. We have toys that were virtually like new for years when we had Bichons and Shelties in the house.

That all changed the day Bentley the Dachshund joined our family. You see, Dachshunds don't play with toys, they eviscerate them. Hard to believe that this sweet little dog (wearing a belly band, no less) is a cold-blooded murderer, isn't it? 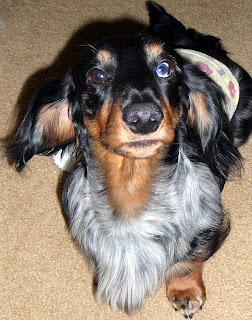 On his first day at our house, Bentley was timid and unsure of the change in his life but he still managed to strip the cover off of a tennis ball. I was worried that he would eat it and get sick, which is what would happen if a Bichon or Sheltie ate part of a toy. When I mentioned it to Bentley's breeder Daphne she just shrugged and said it wouldn't bother him. And it didn't.

I guess it's a breed thing. Dachshunds were bred to kill varmints. Bentley hasn't had an opportunity to kill real varmints (although where was he when we had the mice infestation last fall?). His sisters found a garter snake last summer and had a great time killing it though so no doubt he would do the same given half a chance. What with the lack of opportunity available to him to kill real varmints, he concentrates on the dog toys. Our dog toy box hasn't been the same since he arrived.

Case in point, the duck: 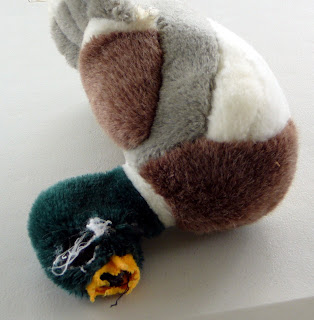 The duck is a favorite in spite of his lack of beak and eyes. It still shakes dead really well and quacks in protest. Good times.

When Darcie and I were in Saskatoon at the dog show we went toy shopping because I had neglected to consider B's desire to kill toys and didn't have the forethought to pack any to take along. So he was trying his best to steal and kill Katie's Webkinz.

We found lots of great dog toys. Here's the screamin' monkey. He makes the most awful computer-generated shrieking noise. B loves him to death. Literally. 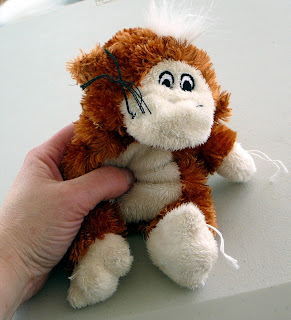 I had to prop him up for the picture because if I didn't, this is what happened. 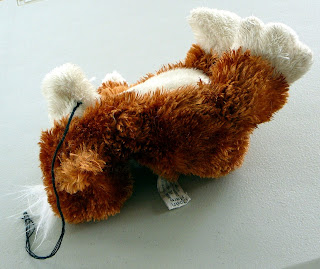 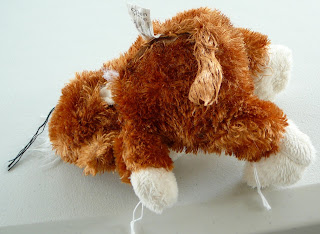 You see, B has destuffed his head and the noisemaker piece has migrated to the empty head so he is a little top heavy. Poor monkey.

Here's another toy that I thought would be great for B and might last a little longer than usual. This cleverly designed hedgehog (or whatever he is) has a pocket in his belly that is filled with "eggs" with squeakers in them. 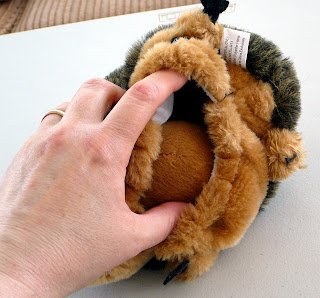 When the dog disembowels the toy to get the squeakers out, you can put them right back in again for more killing pleasure. 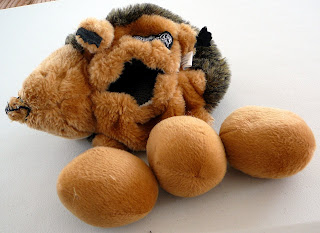 It even came with some replacement eggs to use when the original eggs bite the dust. 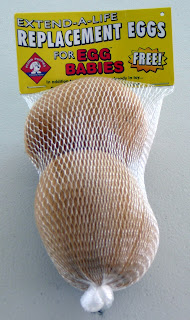 B sometimes does pull out the eggs but he prefers to chew on the hedgehog's ears and nose. 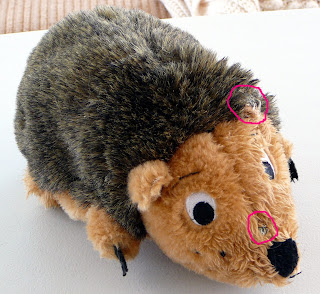 I think that he is smart enough to realize that he just wasn't making any progress with those eggs; kind of like the futility of blowing out those trick birthday candles that keep relighting.
Harrison has no desire to kill the hedgehog because it makes a darn fine pillow with all those eggs inside. 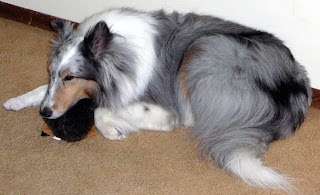 My toy poodle loves to kill his toys. The first things to go are the nose, ears, and tail. He hasn't killed the two knitted toys I made him but the fabric was knit so tight it could have stopped bullets.

So funny! Your toys look like our toys. We have a basketball called bird that actually embarrasses me but Dunkin carries it everywhere.