the swatch and keep an eye on those little critters 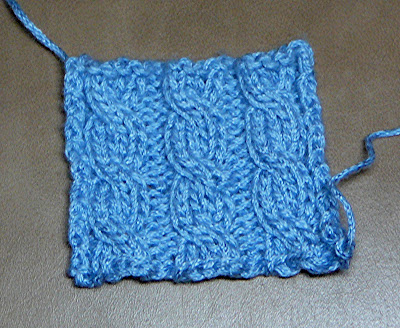 I think that I have settled on this cabled ribbing for finishing the machine knit cardi. I'm going to knit this on the bottom and sleeve cuffs and just knit a simple rib for the front and neck bands.

On a totally different topic, a local Boxer breeder was playing with her 3 month old Boxer babies outside last weekend when a bird of prey swooped down and took one of the puppies! The puppy weighed over 19 lbs. so the breeder never expected that a bird would be interested in a puppy that heavy. As the bird flew up the breeder started screaming and running at it. The bird, for whatever reason, dropped the puppy and somehow the breeder caught it before it hit the ground. Unbelievable! Thankfully all ended well and the puppy is not hurt. You can read about this on Bill Stovin's blog. The moral of the story is to keep an eye on those little, and not so little, pets. I've heard of small puppies being scooped up by hawks and owls even in the city but that boxer puppy weighs about as much as Pocus the Bichon!

I'll be heading to Saskatoon later today so won't be blogging until next week. I'll have pictures of all of the fun at the dog show for you then.
Posted by Susan at 11:32 AM

We keep a pretty good eye on our toy poodle. He only weights about 7 pounds.